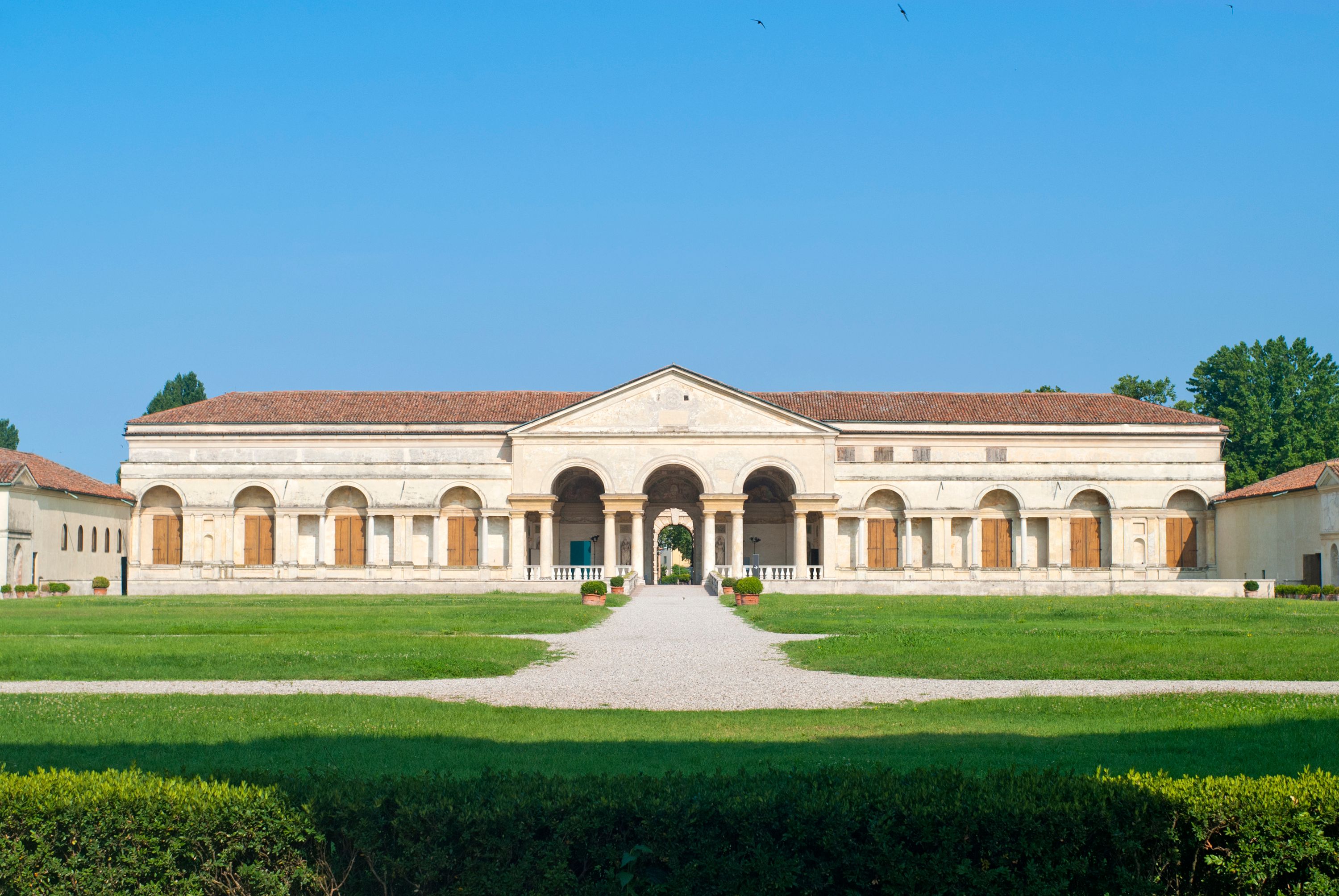 Before going to the heart of Mantua , we recommend you as the first stop Te Palace , a civic museum and an international center of art and culture. The palace was built in the sixteenth century by the architect Giulio Romano for the will of the Marquis Federico II Gonzaga , who wished for a residence destined for entertainment, leisure and receiving illustrious guests. It will also be easy for you to dive into the glitter of a past time with large lounges, gardens, stables and secret passages. In the Great Hall of Horses , Giants, and Love and Psyche you will feel like you are in a surreal and mythological atmosphere. Federico II Gonzaga , thanks to this Palace, obtained by Carlo V in 1530 the noble title of duke. Obligatory stop! 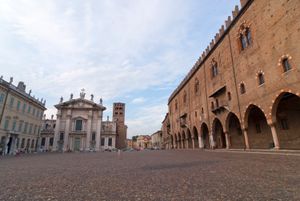 We begin to know the heart of the city of Mantua starting from Piazza Sordello , center of the political and religious power of the city. The Gonzaga family in 1350 redesigned the Piazza, which still preserves its exciting medieval imprint , and dedicated it to the Italian poet and troubadour Sordello da Goito . Walking south-east you will be able to admire the old mosaic flooring of Roman times. A place to explore where the most important city buildings to see in Mantua, such as the Ducal Palace , the Bishop’s Palace, the Captain’s Palace and Palazzo Castiglioni, are to be explored. 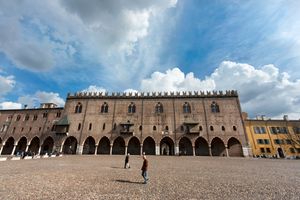 A must see absolutely to understand the prestige acquired by the Gonzaga family in Mantua is the Ducal Palace . A unique monumental and architectural complex located in the northeastern part of the city between the ancient Sordello square and the shore of the lower lake. Inside, you will have a four-century journey from 1320 to 1707, from the medieval , the Renaissance, and finally to the neoclassical style .

Another symbol of the power of the Gonzaga family in Mantua is the Castle of San Giorgio embedded in the mighty Ducal Palace . You will find yourself in front of a square-shaped building consisting of four corner towers, and encircled by a moat with three doors and its lifting bridges, defending the city. With the Marquis Gonzaga the castle lost its military and defensive function. In one of the towers the Renaissance artist Andrea Mantegna gave vent to his creativity in the Picta Room , called the Wedding Room . Inside the room you will feel obsessed, but not afraid! They are the various painted figures, overlooking the famous prospective eyeball , looking down. We assure you that this room will make you crazy: the frescoes blend perfectly with the spaces and the architecture of the room! 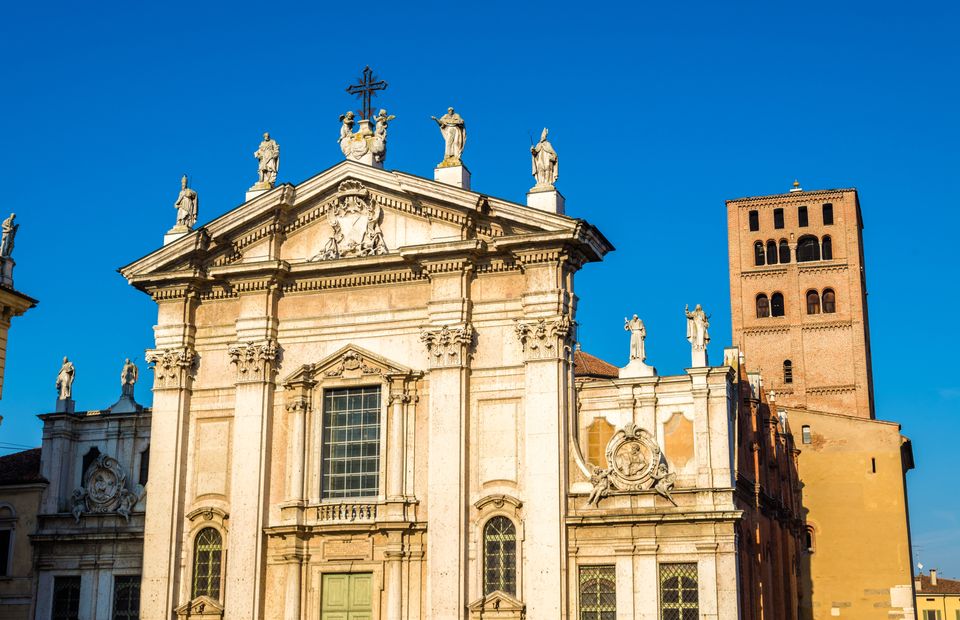 In Piazza Sordello is also the Cathedral of Mantua , dedicated to Saint Peter , the main worship place in the Lombardy city. It is a very ancient church, worth visiting for its unique five-nave architectural structure , and the Renaissance paintings it hosts. A grace to look at is the Via Crucis in terracotta made by the sculptor and medieval painter M. Andrea Jori : to see, in Mantua!

A few steps from Palazzo Ducale , harmonious forms and elegance blend into the Basilica of Sant’Andrea , the largest of Mantua. Designed by Leon Battista Alberti , it was built after his death by the architect Mantua Luca Fancelli . The Basilica is in the heart of the city; has a cross-plant, the 80 meter high dome is by Filippo Juvarra and the entrance is framed by a monumental portico. The interior is finely decorated with coffered ceilings and features works of art known as Mantegna , Correggio , Romano , Fetti and Campi . Remember to visit the crypt and the sacred pots of the Longino centurion, kept in a teak!

The city’s neuralgic center is in Piazza delle Erbe , so called because it has long been home to the fruit and vegetable market. Close to the Basilica of Sant’Andrea , it is one of the oldest squares in Mantua . While on the one hand you will be fascinated by the remarkable monuments such as the splendid Rotonda di San Lorenzo , the Palace of the Reason , the Mercantile House and the Astronomical Clock ; on the other side, the late Gothic and Renaissance arcades will capture your attention because they host numerous shops , taverns and clubs. Ideal place for a culinary getaway! 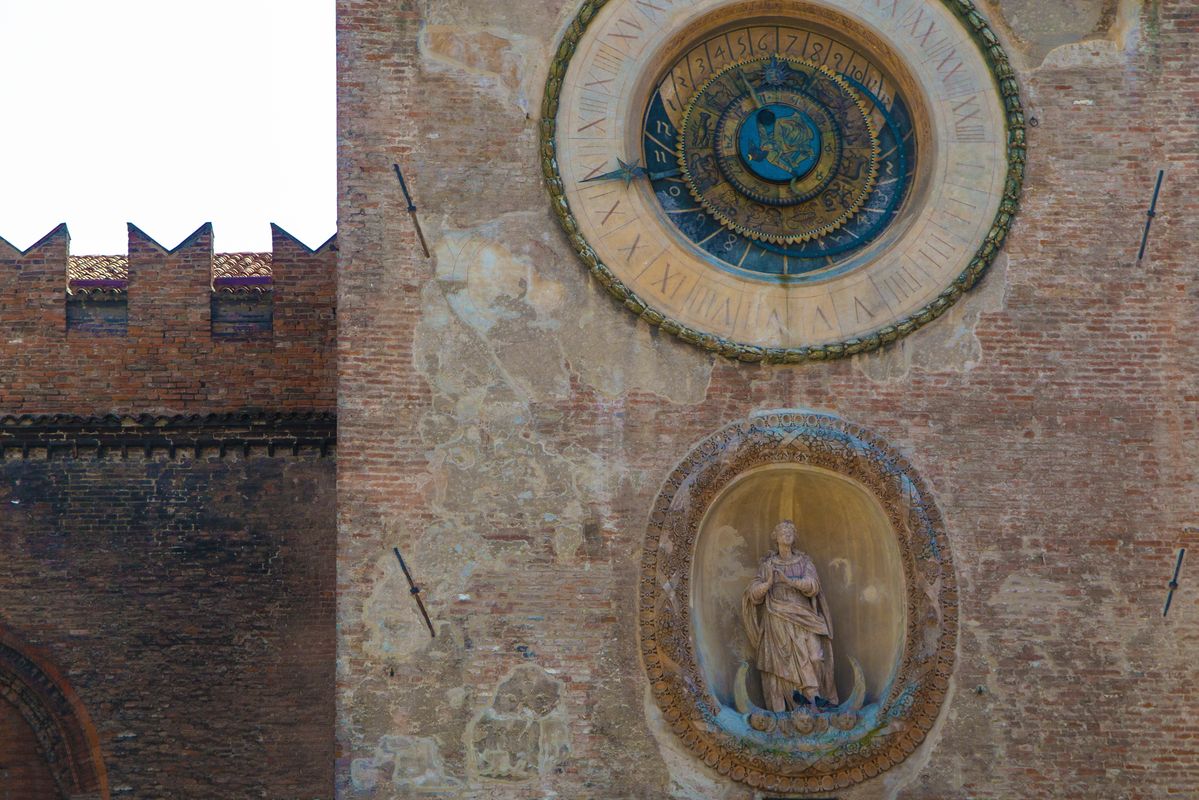 The Torre dell’Orologio di Mantova, near Palazzo della Ragione , was built in the second half of the fifteenth century by the mechanic, mathematician and astrologer Bartolomeo Manfredi , known as the Bartholomew of the Clock , serving the Gonzaga family. The Tower is a jewel of architecture, art and technique. On the outside shows a clock with hours marked by Roman numerals, zodiac signs, planetary hours , moon’s day and astral position. Your eyes will be amazed at the internal gears and the mechanism that runs the bells when it is time. At the top of the tower you will have the honor to observe Mantua and the lakes that surround the city, about 32 meters high. The view is breathtaking! 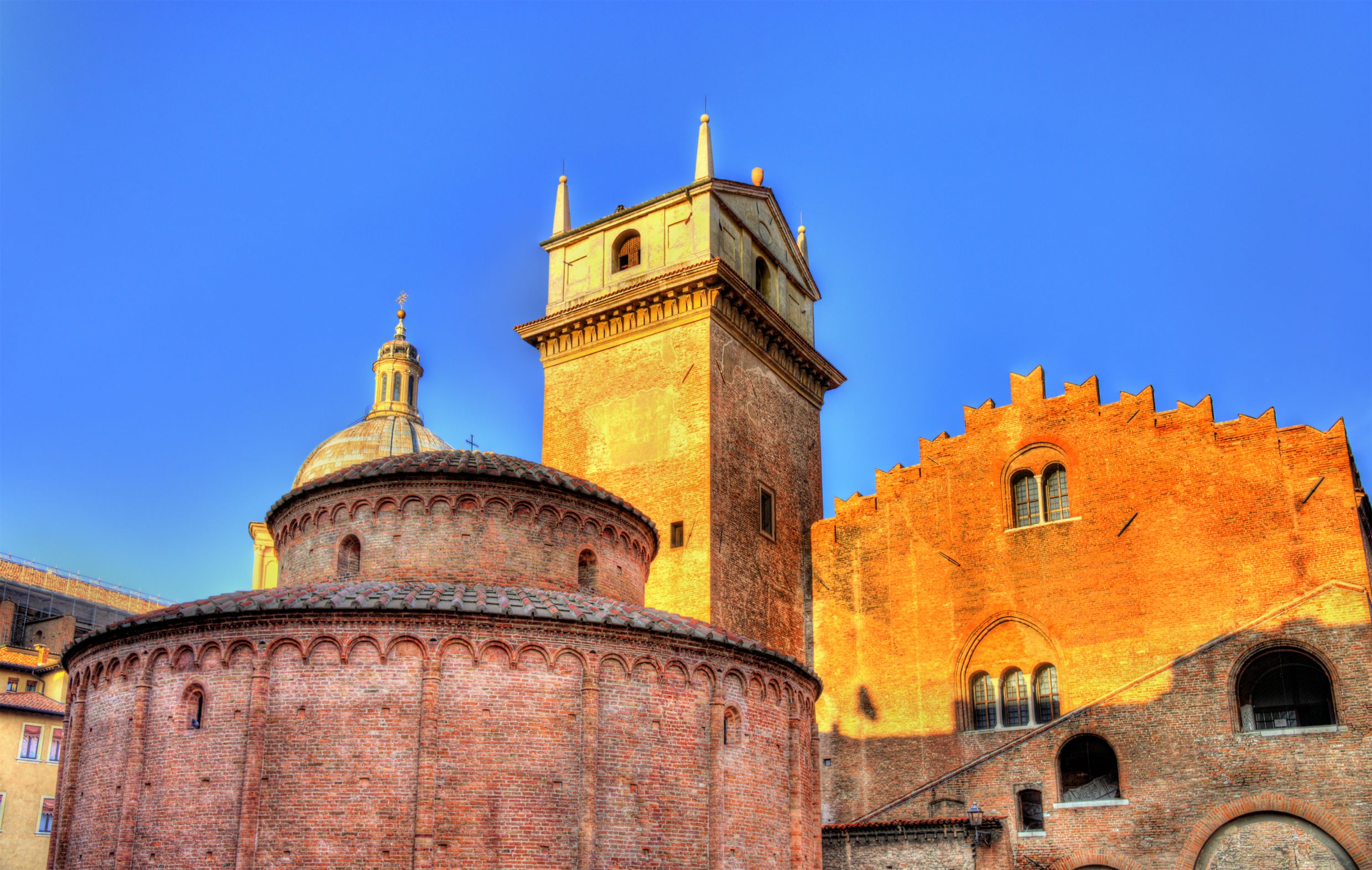 Round of San Lorenzo

Do not leave Piazza delle Erbe without seeing the Rotonda di San Lorenzo , the oldest church in the city, of medieval times, built for the wish of Countess Matilde of Canossa . Simple, exquisite, sophisticated and dense architecture inside architecture. Looking at the twilight traces of the original Byzantine frescoes dating to the 11th century you will be invested by a feeling of wonder and mystery . 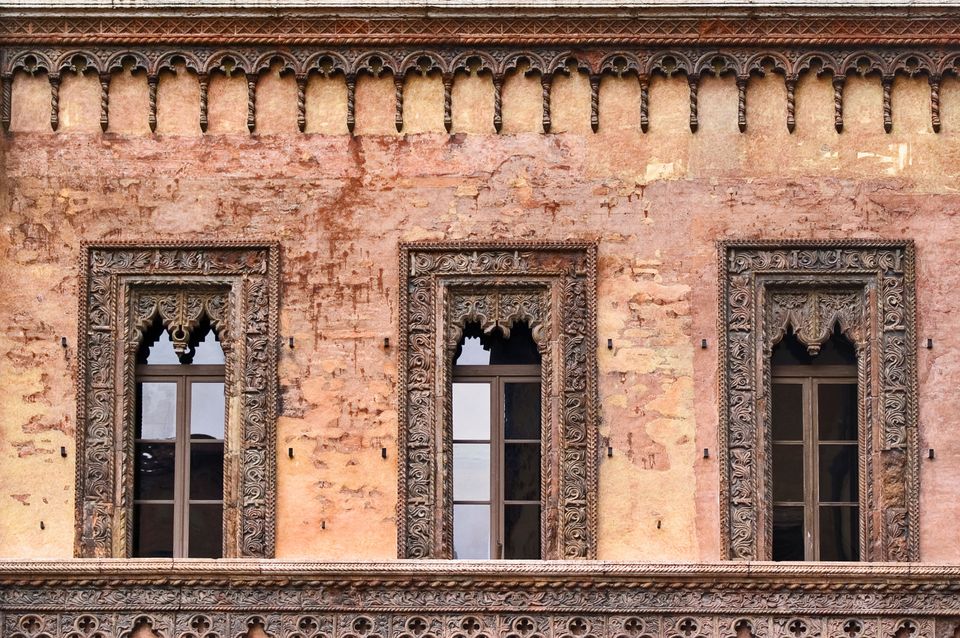 Casa del Mercante di Mantova is one of the rare examples of well-preserved Gothic style buildings; is located in Herbs Squares . It was built by the textile merchant Giovan Boniforte from Concorezzo as a house-shop . The façade is very characteristic and original, with two friezes with terracotta columns and special windows with large decorative edges. On the archery, under the porch, there are engraved objects that the merchant sold in the shop. A 15th century architecture palace not to be missed!

The Church of St. Francis of Assisi in Mantua, built in the 14th century, testifies to the will of the Gonzaga to widen its power to the periphery. In the fifteenth century the church was consecrated to the cult and chosen as the burial site of the Gonzaga family . In the Napoleonic era, his artistic treasures, which were used as barracks and damaged, were plundered. Reconstructed, keeping the elegance and architecture of the Franciscan Church , the Church of St. Francis today is impressive today with its large central and interior rosette divided into three aisles with Gothic arches and wooden ceiling. Believe in admiring some of the original frescoes such as St. Francis who receives the sting of the painter Stefano da Verona . 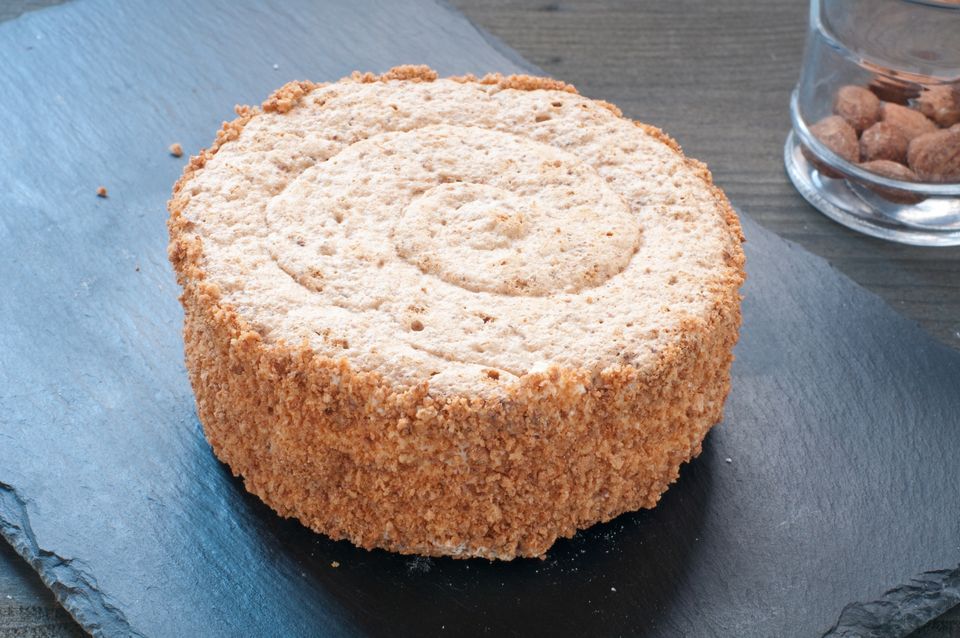 12. Confectionery The “Tur of Sucar”

Walking in the center of the city, just a stone’s throw from the Basilica of Sant’Andrea , you will be inebriated by the good scent of the pastry shop La Tur from Sucar , the oldest in Mantua . We are sure it will not be easy to resist! Do not think too much, come in and taste one of the most delicious sweet mantovans: the Elvezia Cake . A cake made with simple ingredients such as zabaione , butter cream , whipped cream and almonds combining Mantua and Swiss traditions . The idea was born from the Putscher family , swiss Swiss confectioners, who moved to Mantua at the end of 1700. What to eat in Mantua? Here’s the answer!

Texts and photos from www.skyscanner.it

Translate from Italian to English with Google Translater