Verona has a unique UNESCO World Heritage Site for its architecture and urban, romantic and fascinating architecture with its bridges over the Adige River, the marvelous palaces and shrill streets of people. From the world’s most famous balcony , Giulietta’s, to the magnificent squares and to the spectacular Arena of Verona , lovers of history will adore how every era has left a mark, something to see and appreciate in this city. 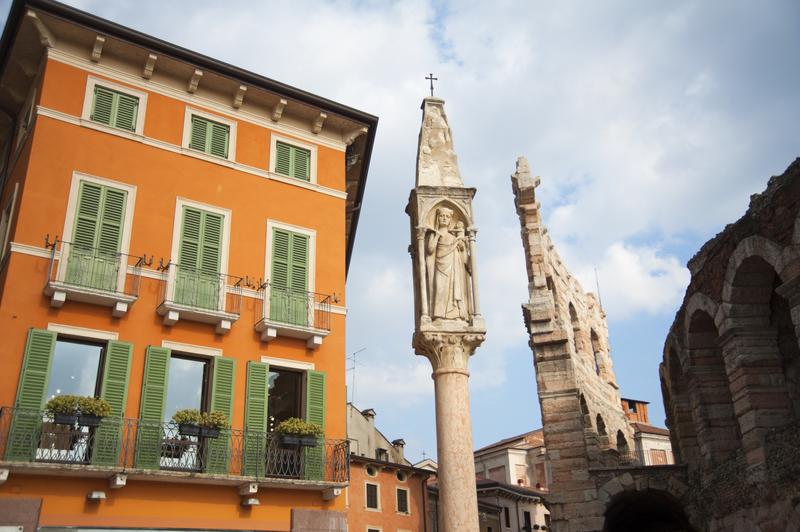 We start our excursion from Piazza Bra , the pulsating heart of Verona, immense and majestic with the center of Verona Arena . On the southern slope is the Gran Guardia , a 17th century palace, which today hosts exhibitions and conventions. On the eastern side, however, stands in all its beauty Palazzo Barbieri , built in the nineteenth century and today the seat of the City of Verona . There is a lot to see, day and evening. Do not be in a hurry: locals and bars animate the square. Sit back and watch a good coffee. 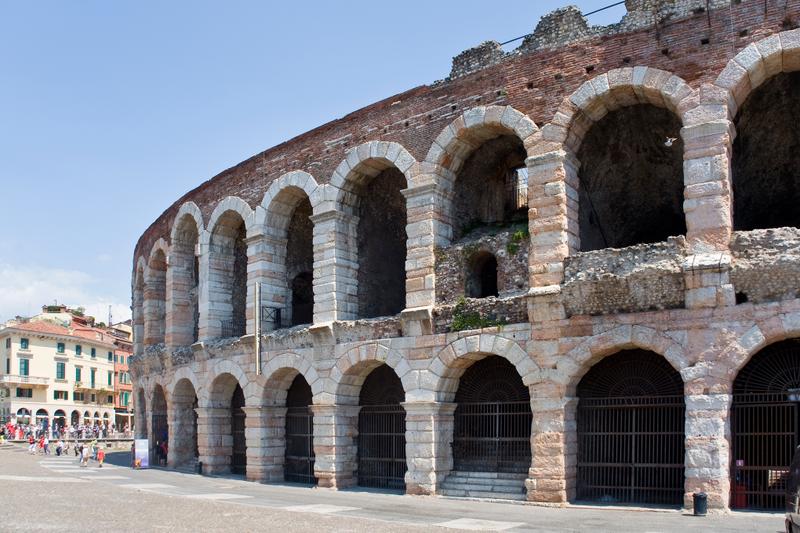 A symbol of the city , the Arena of Verona attracts millions of visitors every year, not only for its beauty and history, but also for the important events and concerts it hosts. Built with the stone of Valpolicella , with red and pink hues, and restored in the 16th century, the Arena can accommodate today about 20,000 viewers thanks to its elliptical shape: it is the third Roman amphitheater for greatness after the Colosseum and the ” Capua Amphitheater . Among the events, do not miss the famous Opera Festival , which every summer transforms the Arena of Verona into the world’s largest open air opera theater ! 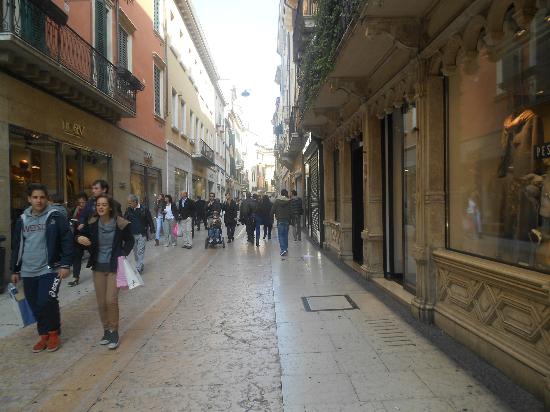 Just a stone’s throw from the Arena , we recommend that you take Via Mazzini , a beautiful street that connects Verona’s two main squares: Piazza delle Erbe and Piazza Bra . Via Mazzini is the ideal place to go shopping, or just to be fascinated by the shop windows … and not only! It is also dotted with marvelous ancient buildings: do not distract yourself! 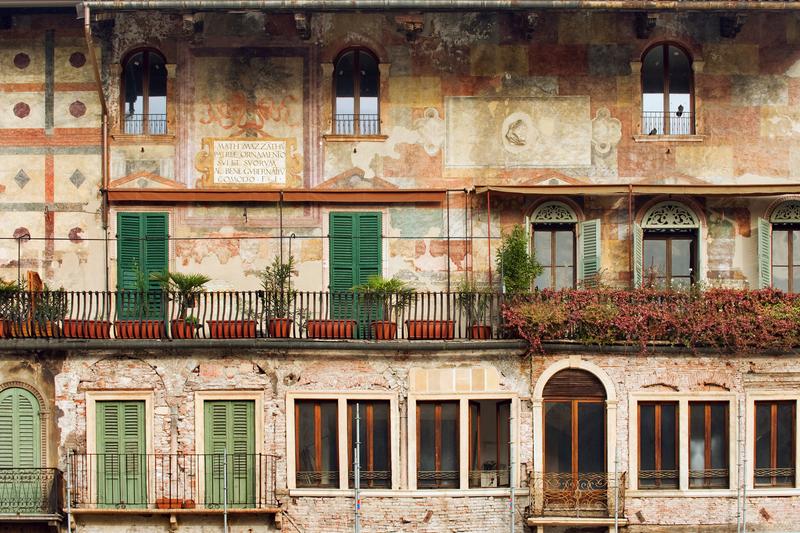 Considered one of the most beautiful squares in Italy , Piazza delle Erbe is in fact a little jewel that will not fail to conquer you. Built on the ancient Roman hole (as the shape suggests), the square is a mix of styles, history fragrances and odors. Take a look at the palaces that surround it, such as the Palace of the Reason , the Mazzanti Houses , the Maffei Palace and the House of Merchants . The center of the square is dominated by the fountain of Our Lady of Verona , built in the 14th century. Also look for the Ancient Column , and the so-called Capitello , a marble canopy from where the city rulers talked to the people (and where the heads of the condemned to death were exposed after the execution). The central part of the square is full of food stalls and typical items. 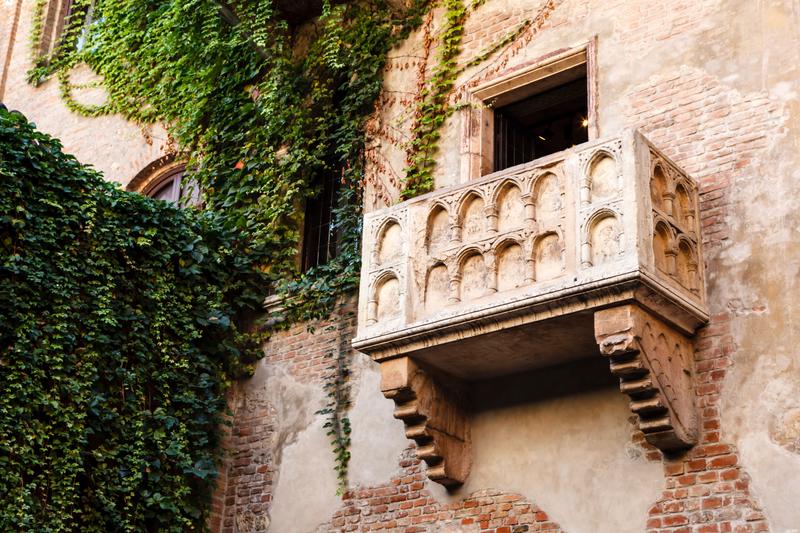 A few meters from Piazza delle Erbe , walking in Via Cappello , one of the most beautiful streets in the city, you will find yourself in front of the famous Giulietta house . Even before you enter the yard you will notice the walls covered with love letters and letters left by lovers around the world. Above is the famous balcony: below, according to the legend, Romeo would declare his love to Juliet (though … the story blends with fantasy. A lot of fantasy!) The house is graceful and welcoming, and worth a visit. Before leaving, do not forget to take a photo with the most famous sweetheart statue in the world! 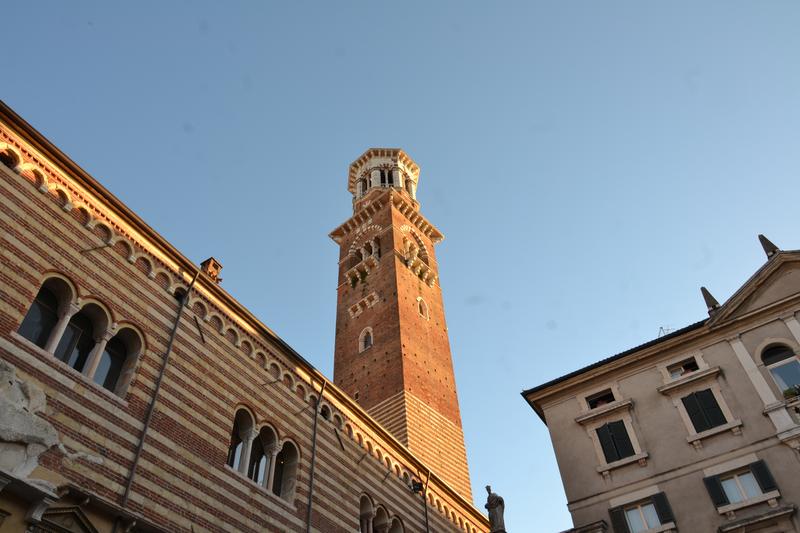 A few steps from Piazza delle Erbe , looking up to the sky, you will find the Lamberti Tower with its 84 meters high. This is a monument to which the Veronese are very fond of. Its first construction dates back to the 12th century, but it was only completed in the following centuries: this explains the mix of materials used for its construction: the lower part is built with tuff and brick rows, the upper one dating back to the 15th century is entirely in brick. The clock was only added in the eighteenth century. Do not be lazy: get up and do not miss the chance to admire Verona!

The Arche Scaligere , a few steps from Piazza delle Erbe , is a funeral complex dedicated to some representatives of the family of the Scaligeri , who ruled for a long time in Verona. The Arches are a very special structure: the oldest, in a gorgeous Gothic style, dates back to 1277. An impressive iron wrap protects the monument, but from June to September it is possible to visit the interior. 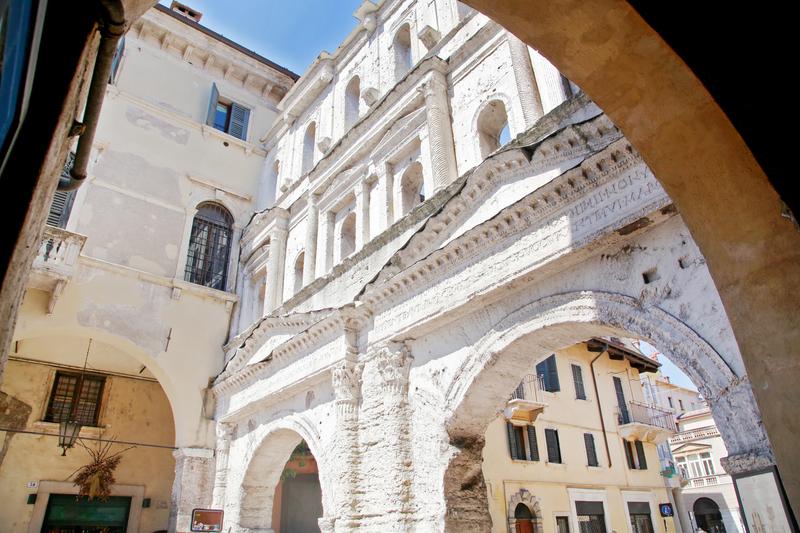 Walking along Corso Porta Borsari , in the historic center not far from Piazza delle Erbe , you reach the same door. This is a gateway to the Roman city dating back to the 1st century BC: the current name alludes to the soldiers who dumped the duty here. 9. Castelvecchio and Civic Museum of Verona

On Via Roma , nestled on the banks of the Adige, is the Castelvecchio , the castle of Verona built in the middle of the XIV century by the will of Cangrande II of Scala . A visit here will take you back to medieval Verona, in a romantic and fantastic atmosphere: the structure is divided between the large courtyard (a strange dog-shaped fountain, symbol of loyalty!) And the Regal of the Scaliger . Once a fortified fortress, today Castelvecchio hosts the Civic Museum of Verona not to be missed! 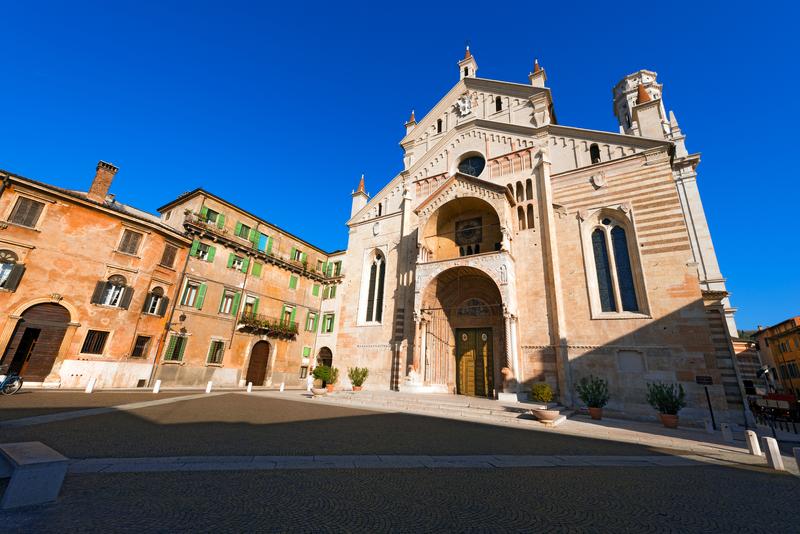 Hidden between the palaces, the Cathedral of Verona stands majestically in the sky of the city. Built on the ruins of two early Christian churches, it was consecrated in 1187 and dedicated to Santa Maria Matricolare . The structure is Romanesque, but the church has been deeply restored in the Gothic and Renaissance times. Inside, the famous Palace of the Assumption of Titian is preserved. From the Duomo you can access the baptistery of San Giovanni in Fonte , a longobard church in which there is a baptismal font entirely carved in marble.

The Roman Theater of Verona rises on the left bank of the Adige River at the foot of Colle San Pietro. Its construction dates back to the 1st century BC, but what has remained today is only a part of the original project: over time the theater was partly destroyed, and other buildings overlapped it. Only in the nineteenth century it was decided to recover the original structure. Each year, in the summer, the Theater lends itself as a frame to a Shakespeare Theater Festival . Not only Romeo and Juliet , in Verona! 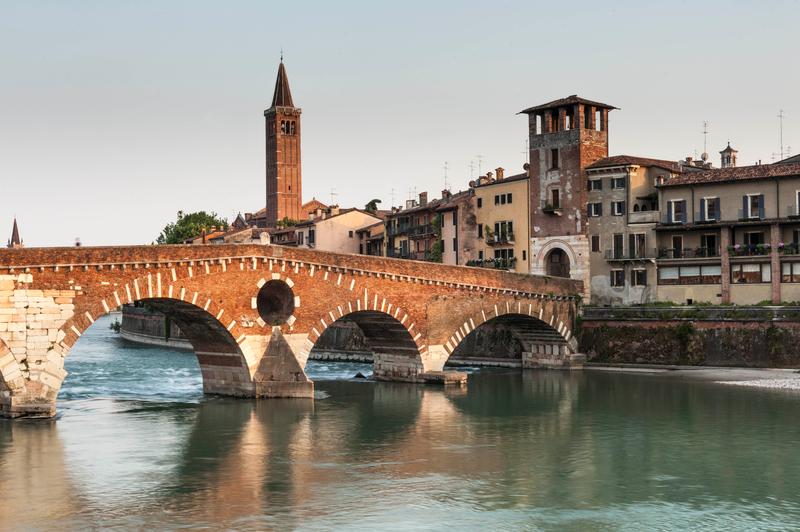 Built with the red bricks typical of medieval Verona, the Scaligero Bridge , adjacent to Castelvecchio, will give you the chance to observe the Adige best , and to take really picturesque pictures through the slits. Along 120 meters, it was erected to secure a way out of town. Destroyed by the Germans during the Second World War , the Bridge was rebuilt with the remains of the stones recovered in the Adige. This piece of history reaches its peak at sunset!

Going a bit from the center of Verona, it is worth visiting one of the Italian masterpieces of Romanesque art, the Basilica of San Zeno , dedicated to the eighth Bishop of Verona . The façade entirely made of marble and tuff is really made of the central rosette , the “wheel of fortune”, which represents the six phases of human life and the futility of material joys. The interior is enriched by various works, such as the triptych of Mantegna depicting Our Lady in Throne . Walking through the marble stairs you will access the crypt , where the body of the saint is kept. A truly suggestive place for peace and peace.